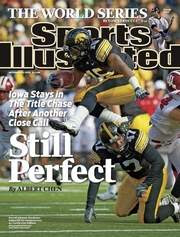 There are those who swear that being put on the cover of Sports Illustrated is the kiss of death. Personally, I don't believe it but occasionally it seems that way. Last Saturday Iowa entered their game with Northwestern rated number 4 in the BCS standings and had a 9-0 record. If you recall in my list of 53 things I mentioned I was a Northwestern fan. Unfortunately for Iowa, their quarterback Ricky Stanzi was injured early in the game and Northwestern won 17-10. This only adds fuel to those who swear by the jinx. If the jinx is true, look at the fact that Michael Jordan appeared on 56 covers. I don't think that hurt his career any. The same can be said for many others who have appeared on the cover. Those who believe in the jinx are using the exceptions to prove the rule.


Yesterday I said I wasn't going to snarky about Sammy Sosa. That was yesterday. Sammy has come out to talk about his skin. Sammy claims it was a combination of a skin cream that he was using plus the lighting. Of course he did not reveal what the cream was. Maybe it was Flintstones cream. I would have more sympathy for him if he would simply keep his mouth shut. Sammy is his own worst enemy.
Posted by Jinxo56 at 4:17 AM

I don't think the Hawkeyes were affected by any jinx, they have been playing fire all season.

I am an anti-Hawkeye, so I'm all for the jinx.

My thunking is done.... HERE