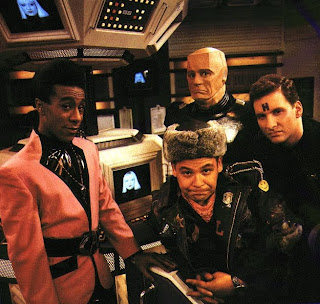 It is always nice when someone new comes by and pays a visit. It is even nicer when they have kind words about my blog. Friday Dsmcaron mentioned me and my Thursday Thunks post. That inspired her to write her own meme. She gave an open invitation to anyone who wanted to answer her questions. After reading this she may regret those words.

Q. Your mom wants a small, inexpensive hand mixer for Christmas. In red. What do you do?

Being the good Wal-Mart employee that I am I go to Wal-Mart.com, where I found out the cheapest one is $29.86. Being the cheapskate that I am, I'll just con my brothers into buying it and claim the idea.

Q. Your favorite television show has a British version and an American version. Which do you watch?

The version that I saw first. If I see the other version I will spend too much time noticing the differences.

Q. Someone tells a joke or a story and although it is amusing, it isn't as funny as they think it is. What do you call that?

I call it a time joke. When I get the time I'll laugh.

Q. Sandra Lee from the Food Network says, "Bam!" Are you amused or irritated?

Confused. Is she having an affair with Emeril? Pardon me, I have to go check out the National Enquirer.
Q. Speaking of British humor, what makes you laugh the most other than (obviously) Monty Python?

Red Dwarf. It has a science fiction setting and is one of the funniest shows I have ever seen. The picture here is the Red Dwarf crew.
Posted by Jinxo56 at 11:11 AM

I like science fiction, but haven't watched Red Dwarf, which our PBS station does play. I'll have to give that a shot.

And HEY? I went to WalMart and got the Hamilton Beach stand mixer with removable hand mixer IN RED for $19. That's right: nineteen smackeroos.

I'll admit, this may just be my warped way of looking at things. But, in thinking about the answer to question #1, why not just give that guy from 'Red Dwarf' a wooden mixing spoon and be done with it? Mom would be thrilled, I'm sure, and how much could it cost? Just wondrin'....